Ask about costumes and props here. Please read the FAQs first before asking questions -- your question may have already been answered!
Forum rules
Post Reply
10 posts • Page 1 of 1

I'm thinking of buying a icomm set up for my TK and was wondering what some of you have? What are some of the pros and cons ?

If I don't get a comm system I probably buy a B grade DLT19.
Top

I use an Aker kit. I love how loud it is and the ports that it has, but I had to tape one side of the stock mic (can hear me breathing in my TS helmet) and the mic cord is quite short when snaking it through the costume. 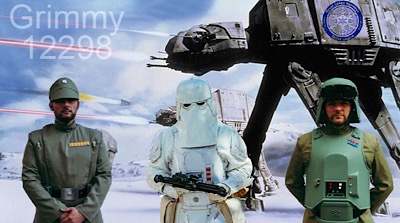 There's very few troopers in GLG who actually use the icomm system. That radio static burst it makes wasn't actually used in the original trilogy for the Stormtroopers. It's something fan-made. So, in theory yes it is a neat effect, but it's extra money for something the movie Stormtroopers didn't have. Pretty much all of us just use the Aker MR1506 voice amp, straight without icomm hooked up to it.
Top

And the Aker Amp is a very cost effective option for less than $30.

Ripcode wrote:And the Aker Amp is a very cost effective option for less than $30.


Ohh! I like the price! I don't really need static burst just the amp sound.
Top

I've got the iComm but never use it. The static burst is really annoying.
Top

Just use Aker, and say "pssshhhhht" before you talk if you want the burst

stasz wrote:Just use Aker, and say "pssshhhhht" before you talk if you want the burst

I did get the Aker and it finally showed up. Where do you guys place the speaker?
Top

I think most people just wear the strap around their neck and have the box under their chest armor.
Welcome to the Dark Side. We have coooookies!
Top

Zarlon wrote:I've got the iComm but never use it. The static burst is really annoying.

Same with me. It's a $100 paperweight that I never use. The "auto" mode is delayed and unreliable, and remembering to manually switch it on is a pain. I just go with the Aker amp sans effects. (But I'll likely need to replace my mic soon--anyone using anything better than the included Aker mic?)
Top
Post Reply
10 posts • Page 1 of 1

Return to “Costume Resources and Questions”